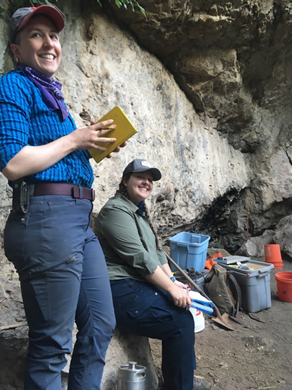 We are two graduate students from different subdiciplines that ended up working in the same lab at the University of Kansas. We have been reflecting lately on the divide between the subdisciplines in anthropology, and how lucky we both are to have been able to hop across that rift in the early part of our careers. We wanted to share some of those reflections with prospective and current graduate students and other early career researchers in anthropology. We hope that this blog post provides a chance for other to ruminate on their own opportunities and attitudes to cross training within the discipline.

Even though most undergraduate anthropology programs in the US take a four-field approach, there is often a spoken or unspoken expectation that you specialize in one subfield fairly early in your education. Plenty of anthropology departments have even split into antho vs. linguistics, anthro vs. “human evolutionary biology,” or have been funneled into other departments such as sociology. In light of this, we think there is something particularly special about collaborative projects that span the discipline’s subfields.

Below is a recapped conversation between us exploring how we have each expanded upon our undergraduate knowledge, and our efforts to engage in cross-discipline training.

BP:       I went to Harvard University and my undergrad was very specific to my field. Our program didn’t actually require all four fields, but rather expected specialization pretty much from the start. We did have to take courses in a different field, but when you declared your concentration in anthro you also committed to a subdisciplinary track.

LS:        I went to the University of Montana and my training was more balanced in all four subfields. I took an intro class in all four subfields and after graduation but before grad school I wanted to be a more well-rounded applicant, so I participated in a three-week field school through the Sanisera Archaeological Institute.

Beyond just understanding the method used in an excavation or DNA extraction, understanding the theories that underpin each subdiscipline is critical to a holistic understanding of research in that field. Knowing whether an archaeological site report was written by someone taking a “culture history” or processual approach can help you understand their interpretations of the site, its context, and its larger importance. In a similar vein, understanding what different types of genetic data and analyses tell us and, perhaps more importantly, do not tell us is vital to an accurate reading of literature in this field. For both of us, recent and ongoing experience on the flip side of the bio-arch split has helped us better understand and appreciate our own respective fields of research.

What specific aspects of your research relies on fundamentals of the other subdiscipline and how have you bridged that gap formally or informally?

BP:       My project depends on methods from biological anthropology- specifically, anthropological genetics. This meant that my first couple semesters at KU were heavily focused on ancient DNA literature, and from there I was able to start learning lab skills. Now, about four years in, I’m an archaeologist working independently in our aDNA facility. I have a more intimate understanding of how molecular anthropologists generate and interpret data. When archaeologists don’t have training in these sorts of analyses, they have to trust any conclusions being presented to them, since they don’t have the tools or knowledge to even know what questions they should be asking. I feel much better equipped to integrate genetic data into my own work now and in the future thanks to this training.

LS:         My research relies heavily on the interpretation of ancient human burials excavated in the 1960s. Since archaeology is inherently destructive, I rely on site reports to draw conclusions about who was buried next to whomhow far away from other individuals. Since I had participated in a field school, I was able to be hired on an archaeological crew at KU, and I spent three sessions excavating at the San Esteban Rockshelter in Texas. I have a deeper appreciation for the archaeological record and the care it takes to maintain that context. Context between the ground and the artifact, and the context between the artifact and its life after it is taken out of the ground. Context captured in field notes is imperative, as well as first-hand accounts of who excavated that artifact, identified it in the field, and why is that artifact important in all scales of context at the site. I saw first-hand how easy it is to miss a soil change, or a small point that ended up in the screen. Informally, I also go to archaeologists first-hand to help with site report interpretations, especially when it comes to jargon or governmental and contractual excavations that often operate under unspoken rules.

We both think this experience has made us better anthropologists, because it helps broaden the context in which we understand our own research. We strongly encourage taking these opportunities when they arise. If you’re a student, you can reach out about field schools, take a lab methods course, or set up an independent study with a professor in a different subdiscipline. This may open doors you never even realized existed and will certainly make you a better scholar.

What advice would you give an undergrad just starting out their degree or someone who is about to graduate looking at applying to graduate schools?

BP:       I think training in more than one subfield is vital, because theory in our discipline is really often broadly applicable. I especially think social anthro theory is easily overlooked for archaeologists and biological anthropologists, but it provides a rich vocabulary for discussing our observations about past peoples’ lives. Definitely spend some time interrogating what conclusions you take at face value, and look for ways you can build the skills to be a more critical consumer of data.

LS:        I would encourage everybody to have a four-field training aspect of their undergrad and even their graduate careers since it gives you a greater understanding of anthropological theory and thought. I also advise students to look to their professors who bridge the gaps already and have established collaborations with other subdisciplines or outside of anthropology disciplines like Indigenous Studies, History, or Biology.

Obviously, we’re both big fans of interdisciplinary training, but we know sometimes it’s hard to learn everything we think we should. The ivory tower doesn’t have to be isolating, so look for opportunities outside of academia. Be patient and take those chances when they present themselves!